This report has been created as a result of cooperation between the OPERAS-P and COPIM projects. They share similar interests in exploring innovative revenue models for open access books.

As part of the Work Package 6 at OPERAS-P we are investigating existing and emerging business models that depart from the Book Processing Charges scheme and often involve libraries in the publishing processes.

As part of the Work Package 2 at COPIM we are creating a model based on cooperative library funding for OA books.

Background to the OPERAS-P project

The OPERAS-P project supports the OPERAS Research Infrastructure by furthering the development of the infrastructure in view of achieving the necessary scientific, technical and community maturity.

The key objectives of the OPERAS-P project are as follows:

Background to the COPIM project

COPIM will develop a significantly enriched not-for-profit and open source ecosystem for OA book publishing that will support and sustain a diversity of publishing initiatives and models, in the UK and internationally. To achieve its aims, the project is divided into seven work packages ranging from the technical (building open-source, community-based infrastructures that support the publication and dissemination of OA books), through to advocacy and knowledge sharing activities (establishing and consolidating partnerships between HE institutions and OA book publishers).

This report reviews existing academic and research library systems for e-content and OA book procurement. It looks into how the e-content is integrated into library catalogues and e-learning environments in chosen European countries. It examines how library communities work and deal with open access books under local OA policies. It also identifies existing funding streams, collective funding groups and consortia and looks closely at emerging new initiatives in OA book publishing, particularly those involving libraries in their publishing process.

While this report draws heavily on the Knowledge Exchange Landscape Study on Open Access and Monographs: Policies, Funding and Publishing in Eight European Countries (Ferwerda et al., 2017), which sheds light on how open access monographs are handled, it also aims to expand the previous work’s horizons, adding new territories of exploration. Next to the often considered Western European countries, we have included those which are sometimes overlooked, trying to paint a more balanced picture of the academic library systems in Europe and understand the challenges they are facing under different regional circumstances.

We have included 14 European countries: the OPERAS core members: Croatia, France, Germany, Greece, Italy, Poland, Portugal, Slovenia, and The Netherlands, with the addition of Spain and the Nordic countries. The United Kingdom is out of the scope of this report since the UK-specific report will soon be published as an outcome of research conducted in the context of COPIM’s Work Package 2.

The present report is informed by COPIM’s Revenue Models for Open Access Monographs (Penier et al., 2020) report, which helped to explain  and systematise different approaches towards OA books publishing when it comes to the used revenue models.

The report is based on a systematic literature review,  desk-based research, and, perhaps even more importantly, on what we heard from the European library community in interviews and workshops. In 14 interviews, representatives of each of the analysed countries were asked general questions about country-specific library systems, OA policies and OA books publishing initiatives (see Appendix 1).

Four workshops – including two regional events for the Nordic countries (Denmark, Finland, Norway, Sweden) and for Southern Europe (Croatia, Greece, Slovenia), as well as two country-based ones for Germany and Poland – gave us a chance to ask more specific questions about roadblocks, selection criteria, and budget allocations for OA book-related projects. A survey which participants were asked to complete prior to these workshops shed more light on the level of familiarity with existing OA books publishing initiatives (see Appendix 2). A set of short reports, discussing main take-aways from each of the workshops, has been published in the form of blog posts on the COPIM website. The workshops will continue to take place in Q1 of 2021, in order to cover all the countries included in this report.

In the final stage of report preparation we asked the interviewees for their feedback on country-specific components and COPIM colleagues for their feedback on the document. Although we were striving to paint  as nuanced a picture of the landscape as possible, we acknowledge that, especially when it comes to emerging OA book publishing initiatives, there might be more out there, whose existence we are not aware of.

The interviews have been conducted by Agata Morka, who has also organised all the workshops, and has written the present report. Rupert Gatti, as the OPERAS-P Work Package 6.2 leader, has supervised all the steps, providing general structure for the performed tasks and co-leading the workshops.

The term “library” in this report is used to signify academic and research libraries, connected to Higher Education Institutions (HEIs). Public libraries are excluded from the scope of this report. National and special libraries might be mentioned if their role is deemed significant in handling/producing OA books.

In this report, we define OA books as both scholarly monographs and edited volumes, published open access. Textbooks, having different methods of usage and acquisition criteria, are not covered by the OA book definition, therefore they are specifically referred to as “textbooks”.

The authors of the report would like to express their gratitude to colleagues who offered their support in guiding us through the meanders of the European library systems. The warmest thank you note to Jadranka Stojanovski, Mojca Kotar, Giannis Tsakonas, Niels Stern, Sofie Wennström, Riitta Koikkalainen, Jan Erik Frantsvåg, Bożena Bednarek-Michalska, Lluis Anglada, Elena Giglia, Eloy Rodrigues, Margo Bargheer, Jean François Lutz, and Jeroen Sondervan. We would not have been able to organise and conduct regional workshops without the generous help of our colleagues: Lucy Barnes, Dan Rudmann, Joe Deville, Izabela Penier, Tom Grady, Anja Oberländer, Paul Schultze-Motel, Marta Błaszczyńska, Anna Wałek, Natalia Wysmyk, and our incredible Master of Ceremonies, Tobias Steiner. We would also like to express our gratitude to colleagues who have offered their feedback on the text of the report. Among them, a special mention goes to Martin Paul Eve for his attentiveness and thoughtful suggestions, and to Rosalyn Sword for her fantastic eye for detail and patience when dealing with a non-native speaker writer. 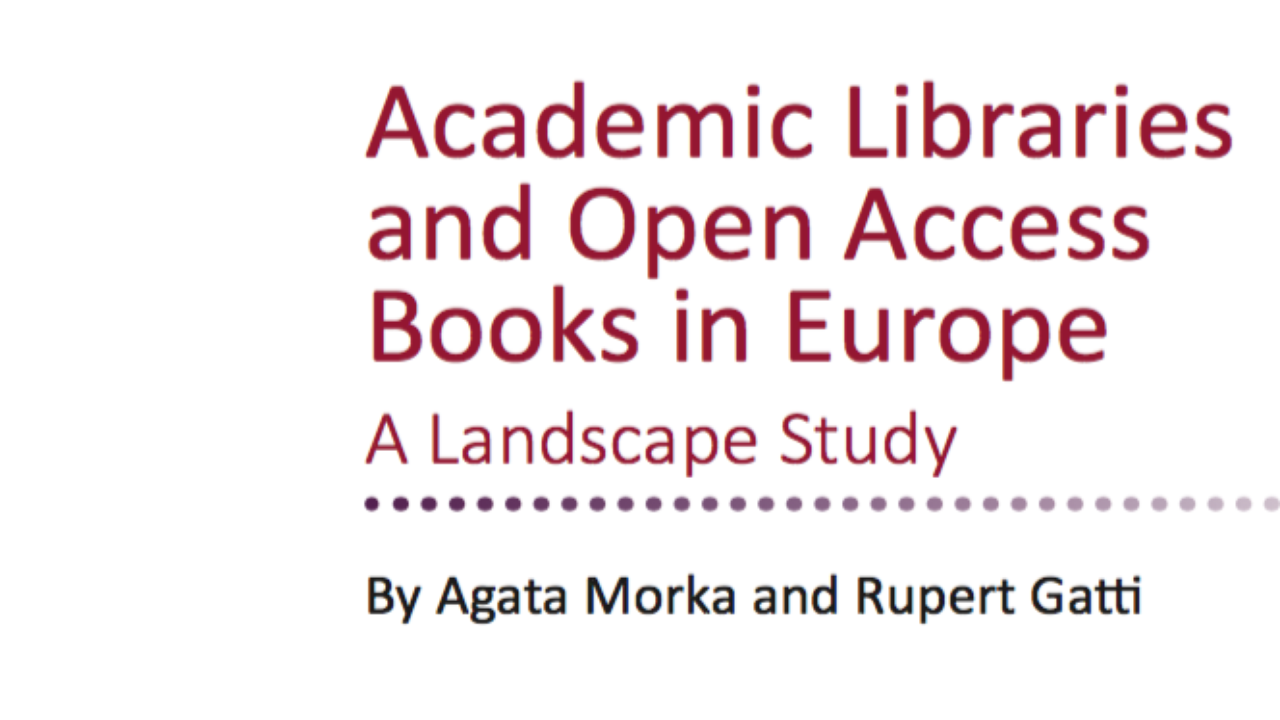